In the measurement and instrumentation literature and industry, the words gauge and gage can both be found to describe a pressure sensor or transmitter that measures relative to ambient pressure.

According to the Merriam-Webster dictionary: ”the word gage is a variant spelling of gauge, which in the noun form refers broadly to measurement (“fine-gauge wire”) or a standard by which something is measured (“polls are a good gauge of how voters might vote”).” The Merriam-Webster adds: “Gauge is by far the preferred spelling in general usage for both the noun and the verb; we encourage you use it.”

Gauge has become the most common word to describe a measuring device or a gauge pressure sensor measuring relative to ambient pressure.

To the right, a gauge diaphragm pressure sensor that measures gauge pressure relative to the ambient pressure is illustrated. 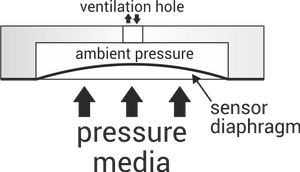 BACK TO KNOWLEDGE CENTER

Do you have questions or need help configuring the right products?

Email: sales@sens4.com
Call: +45 88 44 70 44
Become updated on featured products, knowledge, and applications by signing up to our newsletter

Our passion | Your value™